“The deer census is completed and we’ve received our harvest recommendations for this coming hunting season from the local Texas Parks and Wildlife Department wildlife biologist.”  Read the text.  It continued, “Each of the lease holders is responsible for taking 8 does.”

A few minutes later I called our lease leader/coordinator and told him I would be on the property the first week of October.  I further told him I would be bringing a guest, Brandon Houston, with whom I partner in our H3 Whitetail Solutions wildlife consulting company and we would each take at least one doe.

“I left your MLDP (Texas’ Managed Land Deer Permits) tags in the skinning room in a notebook.  Your buck and doe tags are there along with sheets to record pertinent information from the deer taken.” Said he.

Texas’ MLD Program takes current census data regarding buck to doe ratios, fawn survival, deer density as well as long and short range goals, current range conditions and the overall wildlife management program objectives into consideration.  The local State wildlife biologist then makes appropriate recommendation regarding annual harvest of both bucks and does and issues the appropriate number of tags to the landowner or agent which in turn then issues those to hunters, in our instance a lease group.  Hunters on properties under MLD Programs have to use the tags issued for that purpose and cannot use the tags from their regular hunting license. Deer taken on MLD Permit properties do not count against your license. To help accomplish the needed harvest, the MLD season starts the same time as the early Archery season and continues until the last day of February. This allows for many hunting opportunities.

The initial trip to my western Texas lease was multi-fold.  I was new to the lease so wanted to do some “exploring” to get to know the property.  I also wanted to clean the camp I would be using and start hunting does. While there I hoped to film segments for the “A Sportsman’s Life” weekly TV show I co-host on CarbonTV.com with Jeff Rice and Luke Clayton. And, I wanted to spend time and hunt with Brandon and further introduce him to handgun hunting.

Arriving the day before Brandon I spent the afternoon cleaning the two room, including kitchen, bathroom and sleeping/lounging area complete with a fireplace camp which had been vacant for nine months.  I finished cleaning shortly after dark.

Next morning early, I headed to the ranch’s rifle range to make certain my .454 Casull Taurus Raging Hunter topped with a Trijicon SRO red-dot sight and shooting Hornady Custom 300-grain XTP was still sighted-in at 100 yards.  A single shot confirmed it was!

Our lease has been under a good wildlife management program for several years including a conservative livestock grazing program, a cow-calf operation which rotates cattle through several pastures on the sizeable ranch, moving the herds when grass dictates doing so.  Using this grazing system the ranch’s wildlife habitat is never over-grazed, even during droughts, which are prone to happen frequently.

The ranch has an excellent mixture of brush species including prime browse species like bush ephedra; prickly pear cactus which provides moisture in dry times and Vitamin A which aids in the digestibility of various proteins; mesquite trees which provide both browse and energy thanks to their pods; and limited cedar (juniper) which provides excellent cover.  When rain does fall, the fertile soil produces an abundance of highly nutritious forbs or weeds.  The terrain is comprised equally of low flat land and mesas with deep canyons.  This combination is not only good for deer and the ranch’s other wildlife and it makes it great fun to hunt.

The local deer population has been managed for several years to achieve a near one to one buck to doe ratio. Census data shows a ratio of 1 buck to 1.3 does. Because the on-going livestock/habitat program and proper harvest of both bucks and does the property has for years experienced good fawn survival, even during drought years. Such too, was the case during 2022, a rather dry year thus far.  The current fawn survival rate approaches 60%, with most programs anything over 40% is considered good. Nearly every mature doe Brandon and I saw seemed to be followed by a fawn.

In a drought year, such as we are experiencing in 2022 or even if not, it is always a good idea to remove does as early as legal regulations allow. Doing so, more food is left for those which remain.

First afternoon, Brandon serving as cameraman, we set up near a waterhole.  There are several existing box blinds with corn feeders on the property. But, I am not one who usually hunts from raised blinds over feeders, although I may in the future.  I like hunting on the ground, where I find considerable deer sign including tracks, rubs, scrapes, a natural food source, or under the current dry circumstances…water! With water being a daily necessity, and being scarce, I knew sitting next to water should produce a lot of deer sightings.  We were not disappointed!

That first afternoon in excess of fifty deer came to water.  Most were does and fawns, but we also saw several young bucks.  We decided to hold off shooting that first afternoon because I did not want to shoot a doe at water, rather hoped to simply get some deer on camera, and see what was coming to water in that immediate area.  With what we saw we knew taking a doe would simply mean finding one at a distance and shooting position desired.

Next morning, we were set up on the other side of the same “spill over pond”, water from a water trough, that “spilled” into a small “natural” water hole. Throughout the morning we saw numerous bucks.  All were 3 years of age or younger.  Considering the drought during their antler growing season they had good antlers!  Part of my deer quota allows me to shoot five bucks including one considered a mature “trophy”, and four management bucks.  None of the bucks we saw that morning qualitied for either category.

That afternoon we set up on a ridge where we could glass a considerable part of the ranch’s low lands.  We again saw in excess of 50 deer; some good young bucks, but mostly does and fawns.  Hunting with my Taurus handgun, I feel comfortable shooting at deer out to 125 yards, none were close enough to take a shot.

Next morning early, we headed to a box blind at the base of one of the mesas.  We had five bucks at the feeder when it got light enough to see. When first light grudgingly arrived we could see all were young with excellent antlers for their age.

I served as cameraman and Brandon was the shooter.  The sun was barely shining on the opposite ridge when a doe walked in, cautiously.  She was concerned about the bucks present, their hormone levels were obviously considerably “higher” than hers.  Brandon prepared for a shot with my .454 Casull. When she finally stopped moving and was at a decent angle, he cocked the Taurus’s hammer, took careful aim and pulled the trigger.  At the shot I thought the doe would fall where she stood, but then she bolted into the brush.  Knowing the excellent terminal performance of Hornady’s XTP bullets I knew she would not go far.

We waited a few minutes then crawled out of the blind.  We found her a short distance from where she had been when Brandon shot.  A quick check revealed her to be a 3 ½-year old and she was no longer lactating, indicating she had already weaned her fawn.  After congratulations, Brandon’s first deer with a handgun, photos we headed back to camp to properly take care of and cool the carcass.

With Brandon’s doe cooling, having recorded weight, age and body conditions data we grabbed a cup of coffee and headed out to go look for a doe for me.  With the moon approaching full, we knew deer were moving well into mid-day.  I wanted to go check a waterhole near the south property line, one we had found in exploring the day before.  We had seen a lot of deer in the area.  I wanted to set up on the ground where I could watch a couple of trails leading to water.

Thirty minutes later I was set up next to a big mesquite.  Brandon sat down just off to my side and manned the camera.  We had been there less than ten minutes when a doe and fawn appeared.  No doubt she was mature.  The doe fawn born in late May was fully capable of surviving on her own.  I cocked the hammer on my rested .454 Casull and tracked the doe with the red-dot of my Trijicon SRO sight. She stopped facing my direction.  I waited until she turned broadside, cocked the hammer, took a deep breath, let it all out, settled the red-dot just behind her shoulder then gently squeezed the trigger.

At the shot she bolted.  As she ran I could see blood coming out both her sides. I knew she would not go far.  We waited a few minutes then followed a broad and obvious blood trail.  Thirty steps later we found her.  I checked her teeth to get an idea of her age, the wildlife biologist came out in me.  She was ancient, her teeth worn to the gum line.

Back at camp we skinned, then quartered both our does and got the meat on ice.  No doubt both would provide excellent venison meals for Brandon’s and my family.

I will return to the lease in the next few days to continue taking does, and look for management bucks, then will return again in November when bucks in that part of Texas should be responding to rattling horns.

If you have the capabilities of taking does early, I would highly recommend doing so. And harvesting does what a better way to start hunting with a handgun.  I’ll keep you informed how the rest of my hunts on the lease go… 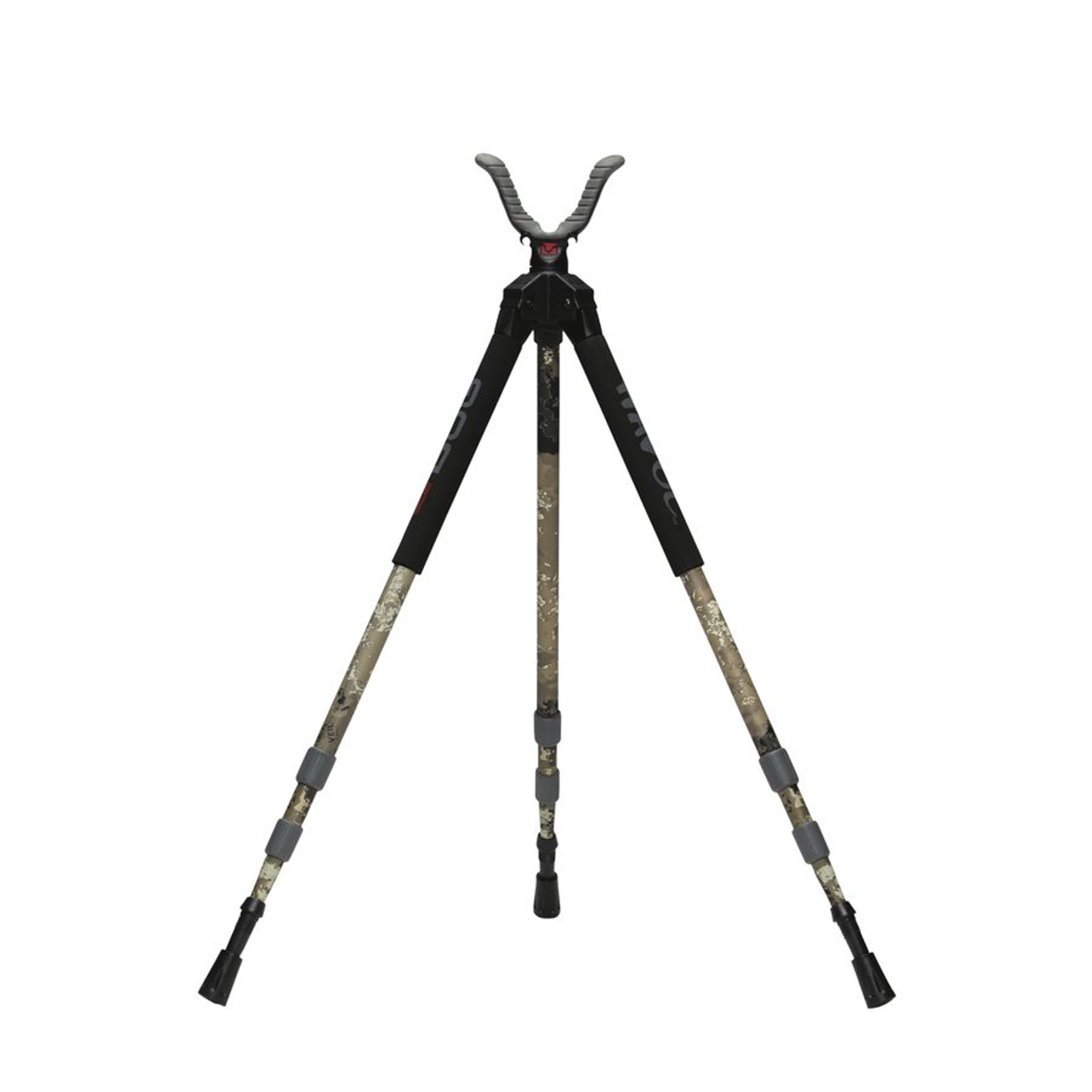